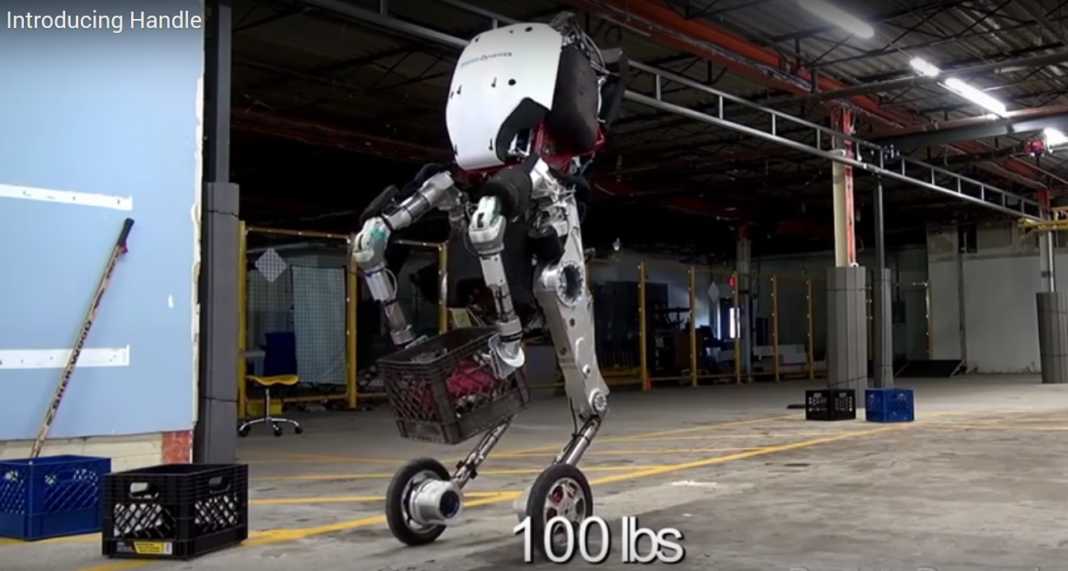 Can you imagine a Robot which is 6.5 Ft tall and easily jumps 4 feet vertically? This is not a fiction but is a truth. Boston Dynamics has recently revealed Handle; a 6.5 ft tall robots with some extra ordinary feature and I am sure you will also surprise to see Handle doing some amazing job.

Handle can easily commute at the speed of 9 mile per hour and can jumps upto 4 feet vertically while it is moving. This robot by Boston dynamics is powered by electric power which help to operator both functions be it electrical or hydraulic actuators. Checkout below video in which Handle is easily using various dynamics for balancing, commuting, jumping and even lifting the weight.

According to official YouTube channel by Boston Dynamics “​​​Handle uses many of the same dynamics, balance and mobile manipulation principles​ found in the quadruped and biped robots we build, but with only about 10 actuated joints, it is significantly less complex. Wheels are efficient on flat surfaces while legs can go almost anywhere: by combining wheels and legs Handle can have the best of both worlds.”

Boston dynamics is a subsidiary of Google Inc who began from MIT where Marc Raibert and his team developed the first robot which ran and maneuvered like a animals. After the introduction of first robots, they founded a company named Boston Dynamics in 1992 which was acquired by Google in December 2013. Currently they are working on various defense projects and robotics technology to empower the world with smart & efficient robots.