Social Networks have always been working hard to encourage audiences to spend more time, share more things and browse through more ads! The competition is consistent and in a way has benefited the end user in more than one ways. The latest talk is about “Instagram Stories” – Instagram’s newest feature and a way to take on Snapchat. Yes, you heard it right! Instagram now allows you to upload and create stories and personal moments that were, till yesterday, Snapchat’s forte. One might even choose to say that Instagram has done a better job here, offering more than what users experienced on Snapchat.

Well, there are over 300 million active users on Instagram daily and the stats is just about half for Snapchat. So, it wouldn’t be surprising if users haven’t ever used or known Snapchat’s Story feature. Basically, Snapchat allows users to compile pictures and videos posted in a period of 24 hours and add graphic elements to them to make a story out of it. It could be someone’s one day trip or a home-alone video! The creativity depends on the user. The story is active on the users account for some time before it automatically gets deleted. However, there are ways to save a story for forever.

With Instagram, the features are similar but you get some extra added to the mix. According to Kevin Systrom,

“Our mission has always been to capture and share the worlds moments, not just the world’s most beautiful moments”.

Instagram also offer better quality filters. This does make the work easier as it would have taken long to decide what to include and what not. Instagram also seeks to lower the bar about the types of photos shared on their Network. This ensures that you will not have to painstaking sit for minutes with every single photo and touch it up to make is count. Instagram users also get more options in their drawing kit including neon like brushes. Another edge that Instagram stories get over Snapchat is that your screenshot always remains private. This means that you can continue living out the creepy truths of your daily life while perusing! 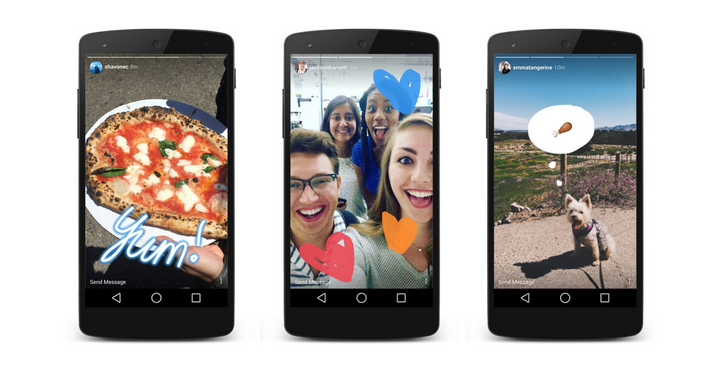 Well, it would be a big thing for the Instagram crowd henceforth. Instagram Stories don’t come with ‘lenses’ as of now while it had been and still is among the most popular features in Snapchat. However, one has to understand that it took two years for Snapchat to introduce ‘lenses’ and we can expect it to roll out on Instagram soon.

In 2013 the social media giant Facebook tried to acquire SnapChat in $3 Billion in cash but the CEO of SnapChat Evan Spiegel turned down the offer. Now, we can say that it was worth a good decision because currently SnapChat is worth $18 Billion and growing. As we know that Instagram is owned by Facebook and the Instagram story feature can definitely give good competition to Snapchat market share.

While tech critics have been considering this as a move against Snapchat, Instagram has also been humble enough to state that the credit for the feature does lie with the ones who originally conceived the idea. They also thank Snapchat for popularizing the feature but aim to make it an area of interest in Instagram too. Mr. Kevin says that “This isn’t about who invented something. This is about a format, and how you take it to a network and put your own spin on it.”

It will be interesting how the end audience will be using it. It would be somewhat truthful to say that audiences, beyond the American borders are still getting used to Snapchat and the opportunity was perfectly seized by Kevin Systrom.

The more the competition, the better it is for the audience. With Facebook’s acquisition of Instagram, moves like this were certainly on their way. Even Snapchat too had recently rolled out a feature called ‘Memories’ that allows publishing and sharing higher quality content. Even photographers and graphic artists have taken ‘Memories’ more seriously and as a tool to build their portfolio. Instagram already provides for photographers from across the globe and across genres.

It has been six years that Instagram has been helping its users do more with their photos and is today a tool to art. This has also helped turn the platform into a serious advertising platform with expected revenue of $1.5 billion in 2016. Features like ‘Stories’ are certainly a means to maintain the popularity and bring in more users to the mix.

We know how organizations have always been building on each other success but ‘Stories’ from Instagram is certainly a sheer brazenness!

Continue Reading
You may also like...
Related Topics:Instagram, snapchat